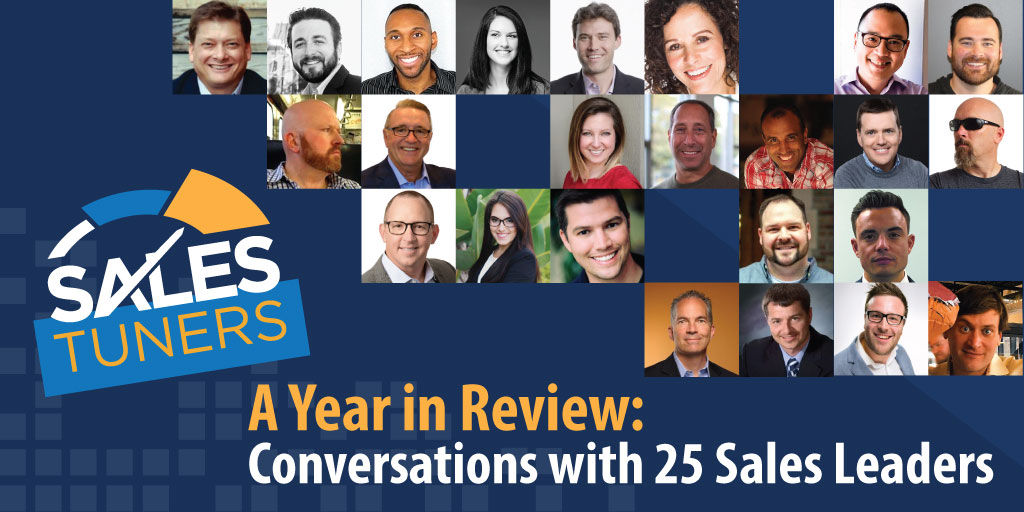 Discover your desire. Grinding is hard, and we know in sales, you’ve got to grind to shine. You just have to. You got to work really, really, really hard every single day doing a lot of stuff that really sucks in order to get the thing that you want. If you’re working for a commission check, to me, that’s just not enough. Figure out what it is that you desire. Figure out what it is that you want.

Full Episode: The Anatomy of a Sales Slump (And How to Dig Yourself Out)

I think salespeople make things way too complex, so certainly we need to make this simpler. People love to buy things, but they hate being sold to. So many people think what we do is literally just pitching people. It’s really about trying to add some science to the art of selling through sales methodologies, the books that you read, the processes that you have in place. I’d say definitely make things really simple for people, and then more importantly to get back to the last point, which is stay the course. You may have the ups and downs of the race, but ultimately the hardest part of the game is staying strong when times are tough, and staying even-headed or level-headed when you’re on top of the world.

Manager of Sales Development at Terminus

You have to stick with it. You can’t get excited about two days when you came in early. You can’t get excited because you stayed late one day. That doesn’t really matter. What matters is the consistent keeping up with it and actually putting the actions with it. When you do that, that’s when you get the true results. If you don’t stick with it, if you’re not consistent, then you won’t see the results. Again, that’s on you because that’s what you can control. Control what you can control, stick with it, and be consistent.

Full Episode: Give Your Pipeline the Green Light

If you’re really grinding, you need to go leave work right now. Work in down time a lot. When you’re that much of a grinder, you’re going to kill yourself and go overboard. You don’t want to do that.

Read. We have a business book library here at our company. We subscribe to all sorts of magazines and periodicals like Wired and Fast Company and Ink and everything, and I’m really shocked at how infrequently people check those books out and read those magazines. My old boss at the Corporate Executive Board, Mark Archer, he said “You read everything you can in business. Read everything you can in sales. We build up our business documents.” It was the best advice in the world.

Full Episode: Own Your Career: Breaking Down Sales Calls Like Game Film

CEO of Strategic Pipeline and Author of Predictable Prospect

Make sure that you start embracing the concept of habit. Habit trumps inspiration and discipline any day.

Look, if you’re grinding, ultimately some of us go into sales because we enjoy doing it. Some of us are forced into sales because for lack of better opportunity. There’s always more sales positions out there, but unless you’re selling a really, really terrible product, don’t give up. Just don’t give up. Look for help. Look for way somebody before you has sold that product or that solution well. If ultimately, you do figure out that the product or service that you’re selling isn’t worth it, but you still feel like you’ve got that sales energy in you, find another company to sell for. In the meanwhile, develop those sales skills, develop the ability to talk and relate to customers. That skillset will be useful for the rest of your life. I look at all my young sellers today, some of them, a year in, two years in, tell me, “you know what, I’m done selling.” I’m like, “You haven’t even started.” Pick up these skillsets because they’ll serve you well for the rest of your career because you can always fall back into selling something. I mean that’s sort of just the pragmatic Kai in me talking.

This is gonna sound really cliché but trust me. It took me 15 years to get here. Put learning over earning and promotion in the beginning of your career. Find a place where you’re gonna learn and grow and develop. Do not chase that title. Do not chase that W2. Chase your skills then later in life you’ll be in a better spot because of it.

Full Episode: Ask What Your Numbers Can Do For You

Some will, some won’t, who cares, who’s next? You have to not get caught up on the losses, you’ve got to just keep on driving through and there’s a bunch of different cliché ways to say it in sales, but the reality is, you have to make the decision to keep on picking up that phone, keep on knocking that door, keep on sending that email, keep on asking for the order, whatever it is. You have to understand that when it’s a “no,” okay, that’s okay, learn from it and move on.

Full Episode: The First “No” is when the Sales Process Actually Begins

Founder and Chairman at AA-ISP

Prospecting should be front and center in any sales role. I don’t care if you’re an account manager with a book of business, you’ve still got to be prospecting. I hope it’s not becoming a lost art. I know we’re growing the lead development reps, sales development reps, that whole role is growing. That’s all about prospecting. It’s a bit of science and it’s a bit of art but you’ve got to work it. If you’re a sales rep and your funnel isn’t quite there, 50% of you won’t make quota. I’ll tell you right now, the reps that I’ve managed that have been off on their quota, almost always, they were weak at prospecting. Learn those skills, practice them, schedule time in your Outlook and get on the phones, get on email, get on video. Do what you’ve got to do but always, always be prospecting.

Director of Sales Development at Emplify

Think about sales like a process, especially when you’re new. The only thing that you should focus on is taking it from A to B, B to C, and C to D. Then start feeling, learning, seeking feedback, and getting better.

Keeping going, don’t stop. I mean, if you’re really doing the grind, working then hats off to you. I honor you, I acknowledge, I’ve got empathy for what it takes to sell and to be on the frontline and make it happen and have faith. Just know that your hard work is going to pay off. If you’re really doing the right things at the right time and the right way, just believe in yourself and believe in the process that you’ll be handsomely rewarded for that effort.

Full Episode: Sales is All BS: Belief System That Is

Chief Antagonist of the A Sales Guy

Commit to yourself. I put this out the other day on one of my Instagrams, stop fucking around, just stop fucking around. You have one life. You have like 400 trillion to one or 40 trillion to one odds on the fact you’re even fricking born, the fact that you’re born in the United States is even crazier, the fact that if you were born in the United States and you were born to a middle class life, cut it out. Get committed to yourself, stop fucking around, stop wasting time, if you’re in sales, love it, if you don’t love it, get out. If you do love it, become the absolute best fucking sales person you could be and then if you become a sales leader become the best sales leader, giver, developer, person you can be. And spend every day building on yourself. Continuous learning, continuous growth, continuous personal development, don’t stop. That’s what I say, just don’t stop ’cause if you stop you’re wasting it.

Full Episode: Bottom Line: It’s Not Failure Until You Quit

I would just say take 100% responsibility for everything in your life. Even the stuff that you can’t help. There’s a ton of stuff out there that you can’t control, but there’s also a lot of stuff that you can control, and that’s like listening to stuff like this, learning stuff, putting new routines in. Take 100% responsibility for everything, for your happiness, for you relationships, for your health, for you job and get rid of all blame and excuses and just focus on what you can control 100%, and just keep moving forward no matter what happens.

Full Episode: The Rise of the Silent Sales Floor

Life isn’t fair and you get not what you deserve, but what you negotiate.

You will never get anything in life that you don’t ask for. So start asking.

Full Episode: By the Numbers: A Practical Approach to Increasing Sales

Have fun. You know, look in the mirror, it’s a fantastic profession that you’re in, it’s enjoyable, if you beat yourself down, it’s a nasty slide. Have fun, just enjoy what you’re doing, perfect your craft and it’s a great ride.

Full Episode: The Danger of Just Winging It

Founder and CEO of SalesLoft

Grinding, the word, it means pursuing the thing you’re trying to achieve without letting anything stop you. And that means that you’re studying, you’re practicing, you’re connecting, you’re getting better, you’re getting smarter, you’re understanding more. You’re listening to things like this. You’re paying attention to your manager. You’re finding who’s the best on your sales floor and diving in deep with them. You’re understanding the product inside and out. You’re connecting with people who are using it and getting success. That’s the grind and it’s all about not stopping that. It’s this idea of grit.

Head of Sales at Tiny Pulse

Full Episode: Strive to be a Sales Professional, Not Just an Account Executive

Full Episode: Know What You’re Fighting For: The Spectacle in the Build-up

I’ve seen reps with I’d say average average skill be wildly successful because they’re just willing to put in the time. I do think it’s a law of the farm kind of kind of job where you have to put in consistent time over time and constantly working on where you focus and what high level task you’re doing.

Have unrelenting focus. Focus and do not get distracted. Focus on the tasks at hand and make sure they’re completed. Don’t leave until the job is done.

Full Episode: No Retreat: When Societal Norms are Misleading

Co-founder and Head of Sales

Always assume the absolute worst case scenario. So even if you think you know an order is going to land tomorrow and you’re ninety five percent sure, even though you think there is actually no chance whatsoever of not getting this deal, always assume that they won’t come in. Because what that will drive is you to not get so focussed and not so reliant on individual opportunities.

Stay low, keep firing. Stay hungry. Surround yourself with people who are smarter than you. Be a sponge. Listen more than you talk. Selling is not telling. Ask questions. Ask thoughtful questions not just scripted things and be authentic. Be in the moment and be present.

Full Episode: Humble Yourself: Getting Comfortable with Being Uncomfortable